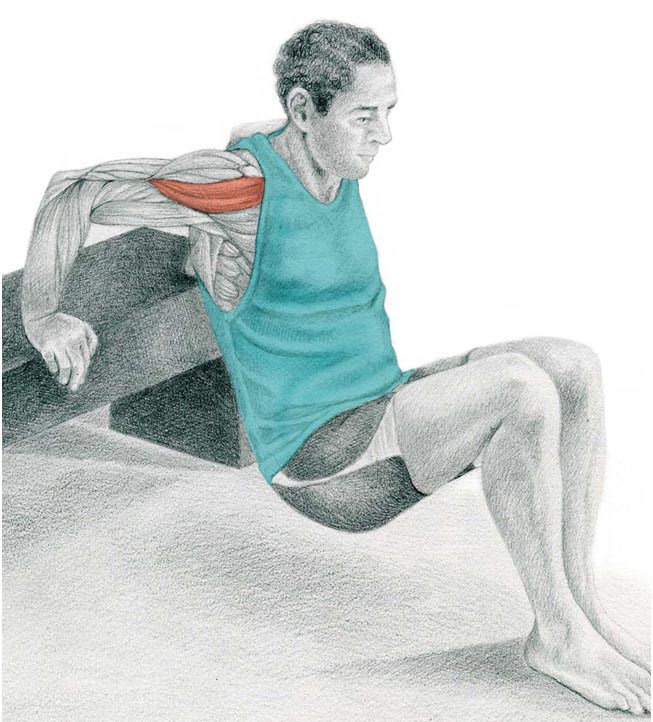 Sit parallel on a flat bench and put your hands on the edge of the bench, moving away slightly from the bench and then lowering the torso down to the spot where the arm forms a 90° angle with the bench. The soles of the feet need to be kept firmly steady, supporting the greater part of the body weight.

Unlike the muscle building exercise, the goal of which are the triceps and deltoids, here we want to place the stress predominantly on the anterior deltoid and on the position being held rather than movement. While this exercise stretches the muscles pointed out, having to hold up the body at the same time reduces the effectiveness of the stretch, as a muscle that is contracting cannot at the same time be relaxed for stretching. Therefore, this exercise will be better when it comes to distending the specified muscles after a session of physical exercise, than be used as a true stretching exercise during a session aimed purposely for stretching and improving mobility. 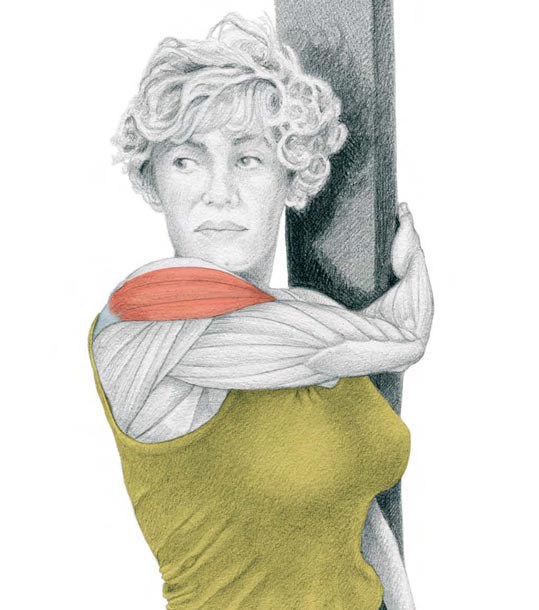 Stand up beside a vertical bar (or some other surface or object), and hold on to it with the arm that is farther away from it. Rotate the torso without letting go of the bar, so that you are able to feel the stretch along the back of the arm holding the bar. Do not forget to keep the arm totally parallel with the hand gripping the bar at shoulder height.

This exercise is intended to stretch the back part of the shoulder and is very helpful for preventing the contractures that develop in the region from time to time. In addition, these kinds of stretches are an ideal match to massages which need to eliminate contractures that have developed. It is difficult just because it is not tensing the entire arm, but rather just the hand in its grasp. Imagine your hands are simple hooks that are fixed to immobilize them and you will have no problem. 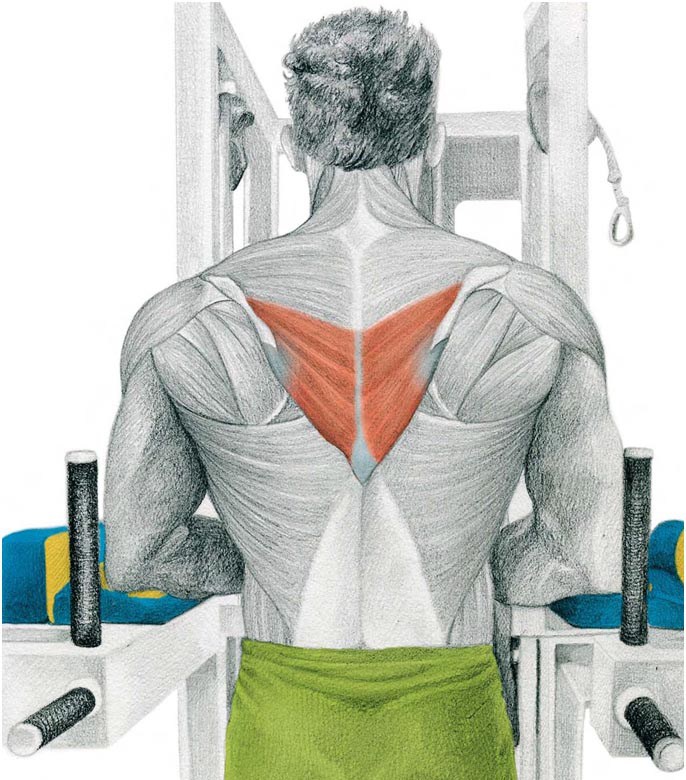 It is recommended that you use a padded horizontal machine, and that you rest your elbows and forearms on the pads to support yourself and let your body hang down passively. You can hold your head in a parallel position compared to the shoulders, but for a better stretch bend the head slightly, allowing the shoulders to come up beside it.

This exercise is rather simple and it aims to stretch some muscles that are not frequently stretched by the usual stretching exercises. When you are in this posture, your column is placed in a free position, which is very favorable to ease any tensions that build up in it. Individuals who suffer from columnar deviations, predominantly scoliosis, should include this exercise in their routine. Thanks to the fact that it is simple, this exercise can be performed by both beginners and experienced individuals. 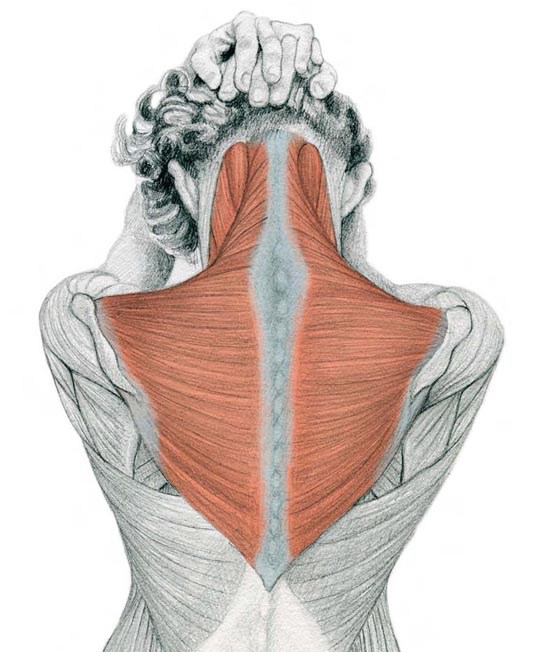 You can stand or sit down, (the latter is recommended) and you should allow the head to fall gently forward in flexion, with the help of both hands placed on top of each other in the occipital area of the head. You do not have to apply force with the arms – their simple weight resting on the back of the head is sufficient.

While you perform this exercise, it may happen that the cervical muscles suddenly tense up to prevent the head from falling forward. As a prevention, the movement must be performed very leisurely, and only at the very end of the movement can we relax the area to permit the force of gravity be the one that carries out the stretching. In the meantime, the rest of the column should be kept in its normal straight posture.

In order to concentrate on the small extensor muscles of the head – and not those of the vertebrae farther down – the spin must be done at the base of the skull with the chin close to the neck and holding the head high with the hands. 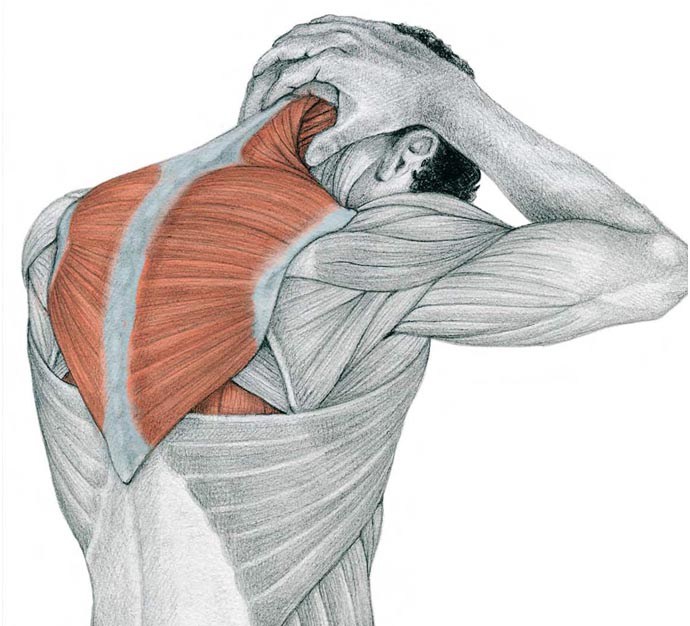 You can sit or stand and you should take the head with the whole palm of the hand and bend downward and forward in a very gentle and sustained motion.

This exercise probably resembles you to one shown previously, but here it is not just a matter of bending the head down, but instead to hold the head with the entire hand and thus draw it forward as well, so that you also stretch the larger muscles, inclduing the trapezius, as well as the lower regions of the cervical spine. Pressure should be felt in the lower cervical vertebrae, as well as in the muscles around the neck along the sides and back. Do not lift your shoulders, because this would reduce the efficacy of the stretch. Just like in all other exercises of the head and neck, the movements in this exercise should as well be particularly slow and controlled.

http://makeyourlifehealthier.com/art-stretching-53-additional-images-show-exactly-muscle-stretching-part-1/http://makeyourlifehealthier.com/wp-content/uploads/2016/03/The-Art-of-Stretching-–-53-Additional-Images-to-Show-You-Exactly-Which-Muscle-You-Are-Stretching-Part-1-e1457004298380.jpghttp://makeyourlifehealthier.com/wp-content/uploads/2016/03/The-Art-of-Stretching-–-53-Additional-Images-to-Show-You-Exactly-Which-Muscle-You-Are-Stretching-Part-1-400x400.jpg2016-03-03T11:36:49+00:00Make Your Life HealthierBeautyBodybuilding & FitnessHealthRecipesstreching
11. Bench dip  Muscles highlighted: Anterior deltoids Instruction: Sit parallel on a flat bench and put your hands on the edge of the bench, moving away slightly from the bench and then lowering the torso down to the spot where the arm forms a 90° angle with the bench. The soles of the...
Ivan Andreevskii.andreevski87@gmail.comAdministratorMake Your Life Healthier
1 2 3 4 5
streching

« If You See A Penny Placed In Your Car Door Handle, THIS Is What It Means!
Reverse Cavities Naturally and Heal Tooth Decay with THIS Powerful Tooth Mask »